TastesSightsSounds: Pythagoras said that this world was like a stage /...

Pythagoras said that this world was like a stage / Whereon many play their parts; the lookers-on, the sage. Shakespeare Agreed! 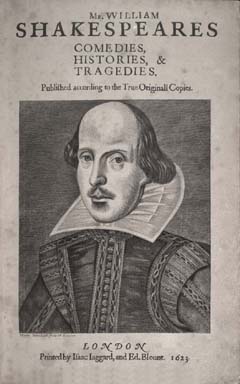 "I hold the world but as the world, Gratiano;A stage where every man must play a part,And mine a sad one."(The Merchant of Venice, Act I, Scene I)

"For what else is the life of man but a kind of play in which men in various costumes perform until the director motions them offstage?" Erasmus

All The World's A Stage

All the world's a stage,
And all the men and women merely players;
They have their exits and their entrances,
And one man in his time plays many parts,
His acts being seven ages. At first, the infant,
Mewling and puking in the nurse's arms.
Then the whining schoolboy, with his satchel
And shining morning face, creeping like snail
Unwillingly to school. And then the lover,
Sighing like furnace, with a woeful ballad
Made to his mistress' eyebrow. Then a soldier,
Full of strange oaths and bearded like the pard,
Jealous in honor, sudden and quick in quarrel,
Seeking the bubble reputation
Even in the cannon's mouth. And then the justice,
In fair round belly with good capon lined,
With eyes severe and beard of formal cut,
Full of wise saws and modern instances;
And so he plays his part. The sixth age shifts
Into the lean and slippered pantaloon,
With spectacles on nose and pouch on side;
His youthful hose, well saved, a world too wide
For his shrunk shank, and his big manly voice,
Turning again toward childish treble, pipes
And whistles in his sound. Last scene of all,
That ends this strange eventful history,
Is second childishness and mere oblivion,
Sans teeth, sans eyes, sans taste, sans everything.

The Infancy
In this stage the man is born as a helpless baby and knows little but waiting as a man in embryo to spring out. 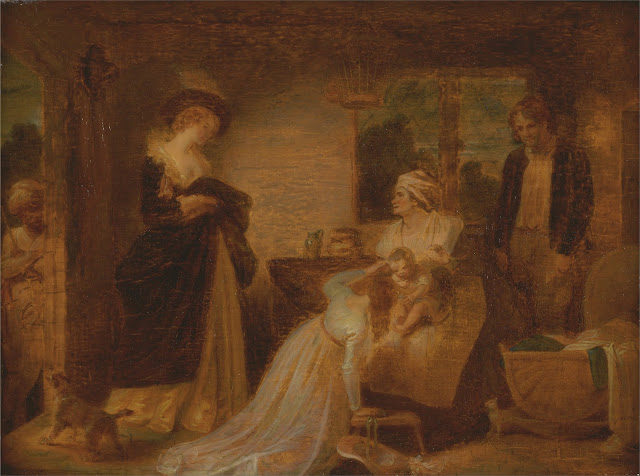 The Schoolboy
Here, he begins his schooling and is unwilling to go to school; the charms of helpless innocence cease. 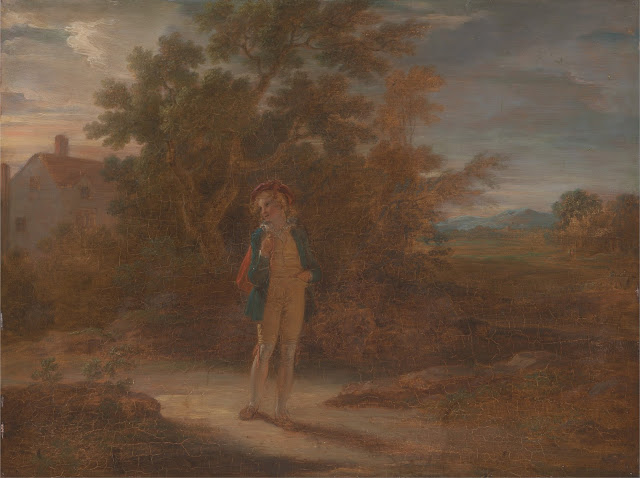 The Lover
The lover is depicted as a young man composing his love poems, shown beneath two pictures of Cupid, the god of love and on the left, Romeo-Juliet balcony scene. 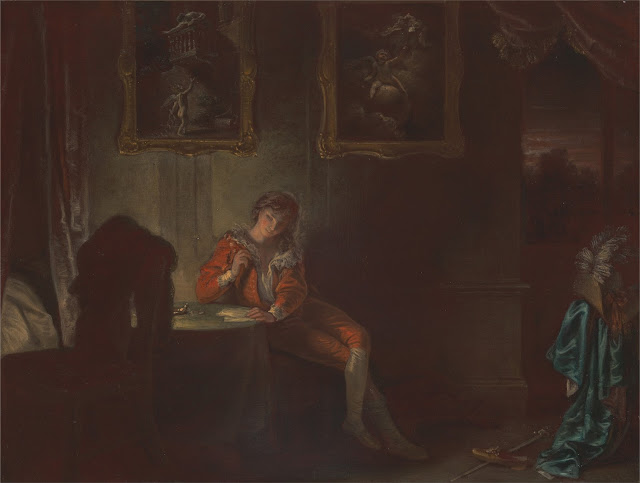 The Soldier
Here, he is hot-blooded with a high degree of self-respect. He looks forward to gaining a reputation, even if it costs him his life. He is inflamed with the love of war and, like a leopard, he charges. 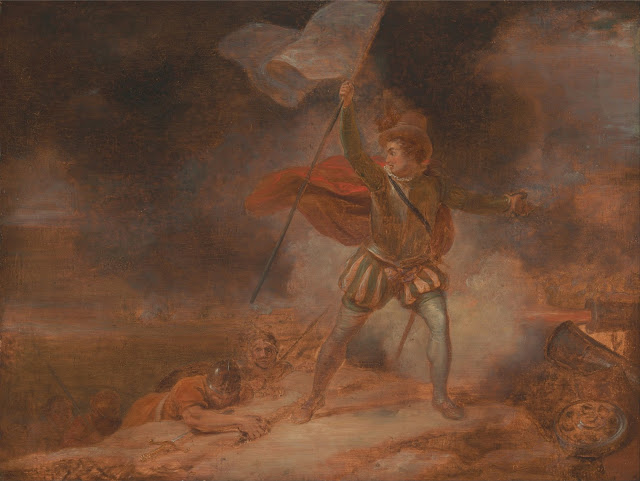 The Justice
Here, he attains a socially accepted state and expounds the wisdom he has gained in his life. 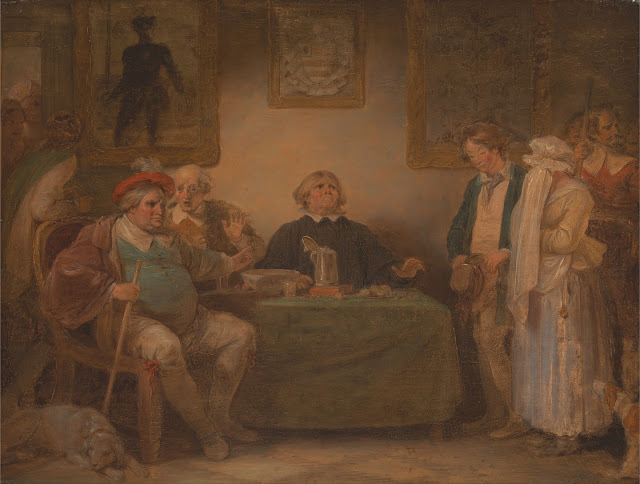 The Pantaloon
Here, he tries to shrink himself into a shell of his worries and is indifferent to his physical appearance and apparel, just as he was in his youth. 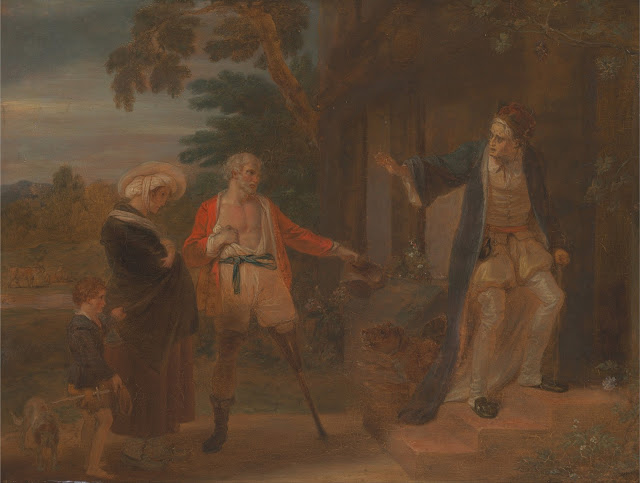 The Old Age
Now he is bound to be dependent on others and there comes an end to 'the strange eventful history' which is nothing but a repetition of the first stage, infancy, lacking all the senses and everything. 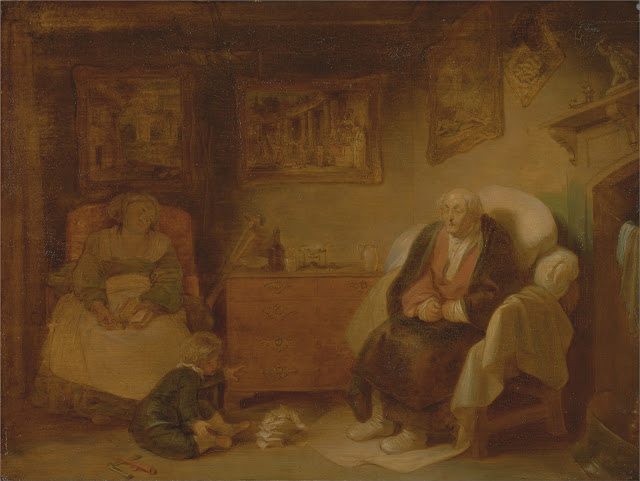 ‘A walking shadow, a poor player
That struts and frets his hour upon the stage
And then is heard no more: it is a tale
Told by an idiot, full of sound and fury,
Signifying nothing.’ (Macbeth)